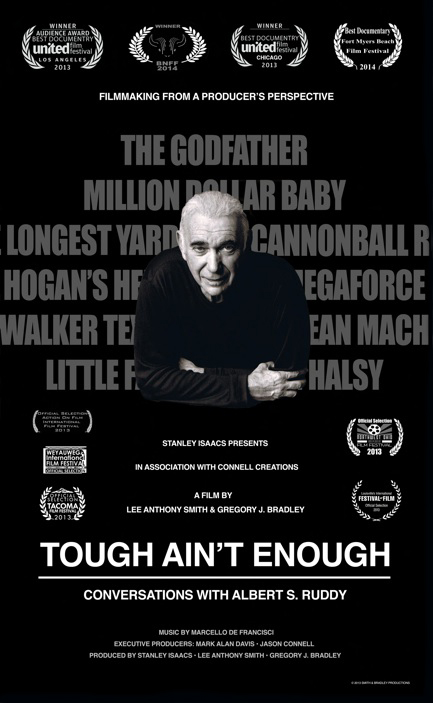 We are also proud to announce that the next two luminaries in our series will be producers Herb Nanas and Edward R. Pressman.

From his early days as an agent to some of the greatest stars of their time to heading three major motion picture studios, Alan Ladd Jr., has been associated with have garnered over 150 Academy Award nominations and 50 wins. He has green lit or produced such iconic motion pictures as Star Wars, Alien, The Right Stuff, Young Frankenstein Gone Baby Gone and Braveheart.

Producer Mace Neufeld is a giant in the industry. From his early day’s in live television to today’s biggest blockbusters, his memorable films include The Omen, No Way Out, The Hunt For Red October, Patriot Games, Clear And Present Danger, Invictus and 2014’s The Equalizer.

From his days as Executive Vice President of Worldwide Production at Warner Bros. to being Chairman of Sony’s Columbia – Tri Star Pictures to becoming an independent producer, Mark Canton has been responsible for overseeing or green lighting some of the most memorable films in motion picture history, including such mega hits as National Lampoon’s Vacation, Batman, Lethal Weapon, Air Force One and 300.

Ashok Amritraj was born in India and as a young man became renown as a world-class tennis player who played on center court at Wimbledon. After concurring the world of professional sports, Ashok moved on to Hollywood and became one of industries most successful independent producers. Ashok is the CEO of National Geographic Films and has produced over 100 films, grossing in excess of 2 billion dollars worldwide, including Antitrust, Walking Tall, Double Impact, Bringing Down the House, Ghost Rider and 99 Homes.

In addition to his over 40 year association with Albert Brooks, producer Herb Nanas has been at the forefront of such audience favorites as Rocky III, First Blood, Mother, 2 Days In The Valley and Golden Globe winner Hatfields & McCoys and Texas Rising.

With nearly 90 credits to his name, Edward R. Pressman has worked with just about every film star in the world and has been responsible for bringing to the screen such iconic films as Das Boot, Badlands, Conan The Barbarian and Wall Street.

With luminaries like Mr. Ladd, Mr. Neufeld, Mr. Canton, Mr. Amritraj,  Mr. Nanas and Mr. Pressman, The Film History Preservation Project and its brand name “The Producers Signature Series” is poised to become a formidable contributor to the documentary world, a prized collectable and a valuable educational teaching tool.

Additionally, to honor our own, a portion of the net proceeds derived from the series will be donated to: The SAG/AFTRA Foundation, The Academy Museum Of Motion Pictures, The American Film Institute (AFI) and The Motion Picture and Television Fund.